The camera obscura has been used for over a thousand years; its origin predates even the invention of optics. The first camera obscura was simply a small hole in one wall of a darkened room or tent. Light passing through the hole formed an inverted (upside down) image of the outside scene on a white screen placed across the room from the hole. The image was dim and fuzzy, but it did accurately show the scenery in full color along with the motion of birds, ocean waves and tree branches swaying in the wind. 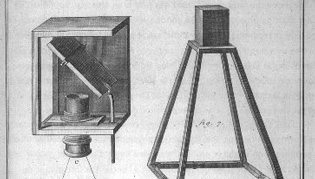 Artists were undoubtedly the first “users” of the camera obscura, as they soon realized that one could trace on the screen the outlines of buildings, trees, shadows and animals. This rough sketch could later be filled in with color to achieve the artist’s objectives while maintaining correct perspective and sizes for near and distant objects.

What is a Camera Obscura?