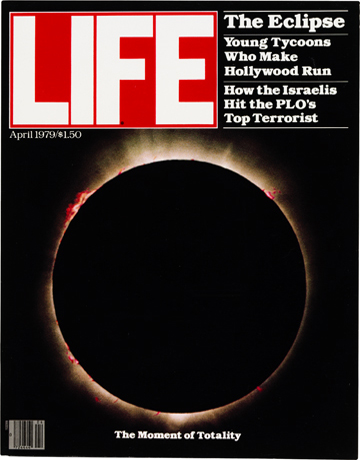 On February 26, 1979, the shadow of the moon traced a path from the Pacific ocean northeastward across Montana and adjacent states into Canada.

As part of an expedition of 500 observers we raced eastward along the Yellowstone River to see totality near Lavina, Montana. The dawn sky was uniformly covered with a thin cloud layer. With the sun only 10° above the horizon we fumbled with our cameras in the 20°F air.

Longer exposures were useless as the cirrus clouds diffused the image, but snapshots at 1/500 second recorded brilliant red hydrogen prominences and were selected for the cover of Life Magazine in April 1979.