George T. Keene retired in 1989 after 37 years with Eastman Kodak Company where he held several management positions in the Federal Systems Division. As supervisor of the Photo Science Group he guided the development and application of the optics, films and auxiliary equipment required for high-resolution photographic systems. He also served as project manager for Advanced Earth Resources Systems. During the Apollo program his group operated the ground reconstruction segment of the Lunar Orbiter project that mapped the moon with unprecedented sharpness. Mr. Keene directed work on several high precision imaging systems for the Defense Department and other governmental agencies. 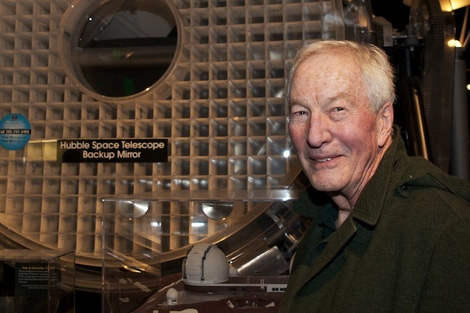 After leaving Kodak, Keene was a program manager for OCA Applied Optics where he guided work on geosynchronous weather satellites and infrared missile systems. Later he consulted for Loral Electro-Optical Systems specializing in space and missile programs such as MSTI, TACAT and Terrastar.

Keene has extensive experience in design and improvement of printing and processing equipment and control techniques for many Kodak films. His expertise also includes development of new color products and processes for the professional motion picture industry.

For the past decade, Keene has produced camera obscuras for custom installations. Several have been built for customers in the New York City area, including one for a prominent location overlooking Central Park. A major instrument was completed for the Griffith Observatory in Los Angeles. Featuring a lens of 12 inches diameter with a focal length of 25, feet, this camera obscura was installed in June 2006 as part of a major enhancement program for this renowned public institution.

Keene’s firm has also made photographic kaleidoscopes and a recreation of the phasematrope. The original instrument showed the first public demonstration of projected motion pictures at the Philadelphia Exposition in 1876.

Author of many articles on astronomy and photography, Keene was one of the first to cover the subject of astrophotography for the amateur in his book Stargazing with Telescope and Camera.

An avid stargazer himself, Keene has designed and constructed several telescopes for use in astrophotography. His present telescope is a 20.5-inch f/5 reflector. He is currently building custom designed camera obscuras for observers who desire this unique vertical telescope. This telescope features a 15-degree field of view along with a fixed eyepiece and comfortable seated observing.

He achieved international recognition for his outstanding results in photographing total eclipses of the sun and had recorded this awe-inspiring event around the world. His pictures of solar eclipses have appeared often in national magazines including the cover of Life magazine for April 1979.

George Keene passed away on July 25th 2019. He was 89 years old.  His passing comes right after the celebration of Apollo's 50th Anniversary.

Astronomy and optics have fascinated me for nearly 70 years. This interest persisted despite many freezing New England nights spent drawing the moon as I saw it through my grandmother’s 8x25 binoculars. But it was only later in college that I found a mentor who showed me how to grind and polish a 6-inch mirror – the heart of my first real telescope. As the optics grew in size (and quality!) there has always remained the challenge of combining glass and metal into an instrument that really worked well. That desire probably arose as a child when I finally was able to build a rubber band powered airplane that would actually fly.

It seems natural to attach a camera to the end of many of these instruments. The magic of photography allowed me to share what I could see with many others through magazine articles and books – and led to a rewarding career with the Eastman Kodak Company. I hope you too will enjoy this website. - GTK